After walking through a beautiful countryside suddenly there was the sea. At least a view on a blue sea. It would take at least another two hours of walking till I could dip my toe in the ocean water. In those two hours the route seemed to be going towards and away from the sea. In the town of Cee I passed a wrinkled old lady who was cutting wood with a hammer and a chisel. Suddenly when she saw me approaching she stopped her work and with a torrent of words she asked for my help. Not that I really understood her Spanish waterfall, but all the gestures that came with the words made clear that she needed help to lock the garage door. Someone needed to push the door in order for her to lock it on the inside. I pushed the door and after some “mass, mass” yells from inside the garage she was able to close it. The lady showed up again and as a thanks for my help I received a big wrinkled smile and a “¡muchas grazias!” after which I continued my walk.

Pilgrims who walk from Santiago to Finisterra receive the Fisterrana, the written proof that the pilgrim has reached “the end of the world”. Actually I collected mine before making the last 3 km to Cabo Fisterra. This spit was for the ancient pilgrims the end of the western world and their goal after Santiago. Here they often burned the cloths they wore during their pilgrimage. Now many pilgrims still try to burn something at Cabo Fisterra, although signs indicate that it is no longer appreciated. Finisterra or Fistera is also the place where the ancient pilgrims collected their scallop shell as a proof of having completed their camino. Nowadays a pilgrim starts already with a scallop shell attached to his bag. I found one on the beach and hence have collected that proof point too!

The last two kilometers before Finisterre were alongside a beautiful white, almost empty, beach. I could not resist and took off my trusted shoes and walked these 2 km barefoot on the beach and in the water. It were the best two kilometers of all 870 so far. 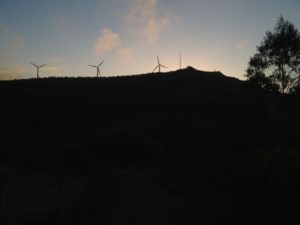 The Spanish horizon is often filled with windmills. Don Quichot would have to work stressful overtime in this century.

And then there is the sea. 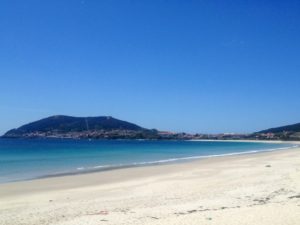 The two kilometer beach before Finisterra 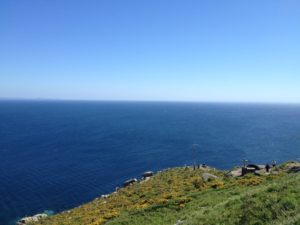 The end of the world, only sea as far as the horizon goes.
[geolocation]