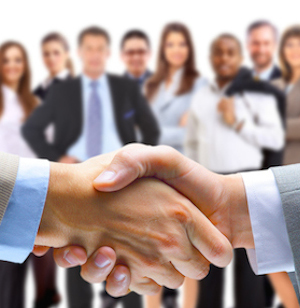 Late 90s when I spoke to audiences about ebusiness I always used Amazon.com as an example. At that time Amazon was an online bookseller and many people felt that it would never be a serious competitor. Why would people buy books online? And even if they did, Amazon is an American reseller and we are in Europe.

Nowadays Amazon is much more than just a book seller with local stores in many countries. Many of the businesses who did not see the real thread of Amazon, and with that also did not see the opportunity for their own business, are no longer in business.

Unfortunately to a certain extend the situation is still the same. In the village where I live the local government is working on plans to restructure the city center to draw people back into the shops. But times are a changing and will we ever be back into old fashion shopping? I don’t think so.

Now, when we look at strategic alliances we see two parties working together to achieve a goal they cannot achieve alone. The partners are dependable on each other for the success of the alliance and the partnership can be managed following alliance management principles.

Over the recent years companies are getting more and more involved in multi-partner alliances. In these new types of alliances multiple companies work together towards one common goal, however often without any interdependency.

Management of these kind of multi-partner partnerships is difficult and some voices claim that multi-partner initiatives cannot be managed.

A new type of multi-partner alliances is what we call the collaborative economy. As Crowd Companies, the initiative started by Jeremiah Owyang, describes it:


The Collaborative Economy is a powerful movement. The people formerly called ‘consumers’ are now getting what they need from each other, rather than from traditional institutions. Instead of buying new things, people are sharing products with each other in an emerging societal shift called the Sharing Economy.
This means that just as with the rise of the internet and the growth of Amazon, again a new type of competition is rising from an unexpected corner. Consumers are suddenly sharing their possessions and capabilities and thus creating a powerful competitor to the established businesses. A traditional hotel chain would probably never have expected serious competition from consumers, still AirBnB is providing exactly that. The same accounts for a traditional taxi company; competition would come from a company like themselves, not from a bunch of united consumers. Again organizations like Uber are organizing a taxi competitor.

The collaborations in the collaborative economy are a new form of multi-partner partnerships, networks that can to a certain extend be managed by the initiating party, but are very difficult to handle in a competitive situation.

Unfortunately the lack of understanding of this new development combined with the perceived threat, makes that established businesses together with governments and labor unions make the step into court to stop the new competition. They are unable to innovate and embrace new business models and playing a fair competition against the collaborative economy.

In Germany a court last month prohibited Uber from offering their service at the request of a cabdrivers’ association. That ban was only to be lifted again this week. It meant a short slowdown for Uber in Germany, but it did not stop the organization from moving forward.

Developments like the collaborative economy are a next stage in the developing field of collaborative businesses like alliances, partnerships and networks. These kind of new developments cannot be stopped, perhaps only slowed down for a short while like with Uber in Germany, but in the end they are probably here to stay and many consumers will not go back to the old traditional behavior when consuming services.

It is better to embrace new developments rather than fight them. Think about it, where is the new competition coming from in your business? Are your services a potential candidate for a collaborative competitive effort? Where is your own sweet spot for your organization, as part of the collaborative economy?

I’ll leave you with that consideration for now. Jeremiah Owyang’s “Quick Guide: The Collaborative Economy Body of Work for Corporations” will be a helpful resource to help shape your thoughts.